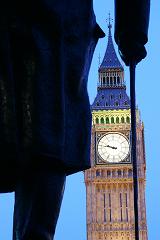 Your audience will be  grateful - no long lecture! Instead a good story about a heroic yet ordinary man.

Universal leadership qualities will come to the fore as you tell the story about the achievements of this remarkable man.

An officer, a historian, an artist, a Nobel Prize-winning writer, a statesman, an orator, a British politician and Prime Minister...all of these attest to a life extraordinary.

Churchill beginnings were definitely not ordinary. He was a descendant of the highly regarded Spencer family. His father, Lord Randolph Churchill was a politician and the third son of the 7th Duke of Marlborough. Churchill's mother Lady Randolph Churchill was the esteemed daughter of an American millionaire. From an early age controversy seemed to follow Winston - he arrived at Blenheim Palace on the 30th of November 1874 - allegedly just eight months after his parents surprisingly hasty marriage.

Although he appeared to have been born with a silver spoon in his mouth, his early childhood was not very happy and indeed he needed to choose to overcome this misfortune or allow it to break him.

It is reported that his mother seldom visited him and he frequently wrote letters requesting permission to return home from school. His father too appeared to have a distant relationship with his son. As a result Winston gravitated to his nanny, Elizabeth Anne Everest.

Churchill was strong-willed, independent and he fought against convention. He appeared to be underachieving at school and consequently was often punished for this. Some Schoolmasters were of the opinion that Churchill would not amount to much in the future. But - opinions are not always facts!

Churchill attended Harrow School and it was here where he began his military career. After leaving Harrow School, Churchill applied to enroll at the Royal Military Academy in Sandurst - he wrote the entrance exam three times before he eventually passed and was accepted. He also chose to apply for the cavalry rather than the infantry because the grade requirement was lower.

Churchill has also described himself as having a "speech impediment". Furthermore, his father died at the age of 45 and his father's death left Churchill with a sense that he too would die young - strengthening his resolve to make his mark in the world  as time was precious.

Churchill chose not to follow the normal path of promotion through the ranks. Instead, he used his family connections to secure postings to active campaigns. He became a war correspondent for many London newspapers and his writings not only assured him of an additional income to supplement his military wages - but they also brought him into the eye of public awareness.

Stories of Churchill's courage - too many to mention them all - kept him in the public eye. In particular, during the Second Boer War in South Africa, he was commissioned to act as a war correspondent for the Morning Post.  It is reported, that after spending a few weeks in exposed areas, he joined a reconnaissance expedition on an armored train and this ultimately led to him being imprisoned in a POW camp in Pretoria.

He escaped from the camp and traveled almost 300 miles to Delegoa Bay - earning him the status of a minor national hero in England.

Churchill's extraordinary life reached a high point when he was appointed as the wartime Prime Minister of England. Winston was an outstanding speaker - he took tough stands and his speeches strengthened the resolve of the British people when their hopes were being dashed.

It is through the impact of many of these speeches that his success and  legacy is still alive today. He is noted as saying, "I have nothing to offer but blood, toil, tears and sweat" and indeed - he offered just that. He encouraged Britain by saying, "We will fight them on the beaches, we shall fight them on the landing grounds, we shall fight in the fields and in the streets, we shall fight in the  hills; we shall never surrender." And he never did! What an extraordinary day it must have been to stand and wave to the crowds at Whitehall when he broadcast to the nation  on 8 May 1945, that the war with Germany had been won.

Churchill died at his home, Chartwell, on 24 January 1965 - aged 90. Ironically, he died 70 years to the day after his father's death and his resolve to make his mark on the world came to pass.

He lived an ordinary life....extraordinarily!

Winston Churchill speeches are great for leadership speeches - but they could just as easily be great high school speeches or even a good informative speech topic.