A good informative speech topic would be Alexander The Great. He was a man of note, a man who achieved a great deal in a short space of time. 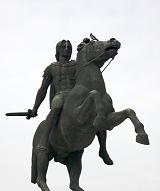 Tell his story -  don't merely list a string of facts. Focus on two or three key areas and develop them into a story using our informative speech outline as a guideline.

You'll have a good speech, you'll present it well and you'll achieve a little greatness of your own!

Alexander the Great - He lived a Lifetime in Just 32 Years

Alexander was born on the 20th of July in 356 BC in Macedon. Controversy surrounded his life from the very beginning. It is said that on the day of his birth, the temple of Diana burned to the ground. Some believed that this was a sign - a sign that represented a power that would one day destroy Asia!

Alexander pursued adventure and honor, rather than vast riches or simple pleasures in life. He strove for fame - his vehicle to achieve this was a kingdom that was enveloped in war, battles and intrigue. This was his platform to show his courage and his platform to make his mark in history.

His road to fame started at a young age. One day a group of horse traders brought a horse to King Phillip, Alexander's father, and  offered the horse for sale. No man could ride him. Alexander is credited as saying that it was a shame to lose such a fine horse merely because no one knew how to control him.  Alexander stepped forward determined to ride the horse. Everyone laughed. He succeeded and the horse, Bucephalus, remained Alexander's horse throughout most of his career.

At the young age of sixteen, King Phillip left Alexander in charge of Macedonia while he traveled extensively fighting a campaign. By the age of only twenty, Alexander was already the King of Macedonia.

However, the neighboring states and some of the cities of Greece rose in rebellion against Alexander's Macedonian rule. It was not for them to bow down to a boy on the throne. Alexander did not stand for their contempt.

First he marched to the Danube and suppressed all of the tribes in the area. Once peace reigned again, still  in search of fame and glory, Alexander faced south and marched to Greece. He had very little money left to pay the wages of his soldiers and his provisions were low - no more that thirty day's provisions were left. When one of his generals enquired what Alexander had actually kept for himself, he replied simply, "My hope!"

Alexander is also cited as leading thirteen squadrons of horsemen under a shower of arrows  Finally Alexander and his party managed to climb the muddy banks and move in close to their enemy. The outcome - the Persian army was running for their lives and Alexander allegedly lost only 34  men.

But Alexander, the campaigner who searched tirelessly for fame and honor - was also Alexander, a leader of men. It is said that one day Alexander and a few men fell behind the rest of his men. They were in a precarious position: isolated from the rest of the army without any shelter from the cold. Alexander apparently noticed some enemy camp fires. He ran over to the camp fire, killed the two guards with his knife and returned triumphant to his men holding a burning stick aloft!

This personified Alexander - he led by example through his courage to face danger and through his willingness to place himself in the line of fire.

Alexander died after twelve years of constant military campaigning. He was 32 - but indeed, he lived a lifetime in those short years.

And his quest for fame and glory? I think his legacy attests to that!

[That's it - a good informative speech topic - at your fingertips!]

A good informative speech topic needs to get the balance right - researched facts interspersed with the human angle and the man behind the public persona.

Return from Good Informative Speech Topic to Words of Wisdom