High school speeches - we all need them, right? So, capture the audience's attention with a dynamic introduction and then tell the story of the historical event. 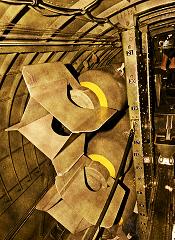 It is a good idea to include researched facts - it shows that you are prepared - and that's a quality that educators value!

A reminder - guard against reeling off endless facts and dates.

Rather incorporate the facts into a story and try and show the human side to the story. You'll find that you will engage your audience.

If your audience is listening, if they are a captive audience, then you have a successful speech.

And a successful speech is credited with a great assessment!

A Skipping Bomb - Strange, but Luckily for the Allies, Very True.

Travel back with me to 1942 - a time of dogfights, panzer attacks and soldiers dying. We are halfway through World War II.

Imagine that you are British aeronautical designer and inventor, Barnes Wallis and you are facing one of the greatest challenges of your career.

Your military brief is to create a bomb to destroy the West Ruhr Valleys and in so doing, cripple the German military industry. It is a challenge and many obstacles need to be overcome.

The bombs need to explode below the waterline right next to the center of the wall to produce maximum damage and destruction. Conventional bombs won't work as they aren't accurate enough to hit such a small target. Torpedoes won't work because the dam walls are protected by anti-torpedo nets.

Wallis's theory drew many skeptics. Many scientists were cynical and his "bouncing bombs" were widely criticized - no one actually thought they would work!

The theory was that the bombs would be released at a precise height. They would hit the water with backspin, bounce several times, roll down the inside wall of the dam and sink into the water to a pre-determined depth. Then, at that precise moment, an automatic device would detonate them and the resulting shock waves would collapse the dam wall.

Now, imagine that you are in the cockpit of a bomber plane. It is May the 16th 1943. Nineteen bombers set out for Germany. It is a clear moonlit night and you are able to see quite well. The dam becomes more visible and you level the plane at the desired altitude.

Your finger hovers over the trigger mechanism and you release the bomb.  At that moment you look out across the night sky. Hundreds of round balls are falling all around you. You watch your bomb bounce. The bomb makes contact with the dam wall and sinks rapidly into the murky blackness.

Suddenly, a muffled boom, followed by a huge splash of water. You have crippled a military giant. You are one of the dam-breakers!

Well done - high school speeches - your mission is accomplished! Time for a break - computer games anyone?