Persuasive speech ideas are often well suited to argumentative speech topics too. Argue your viewpoint logically and you'll persuade your audience in the process! 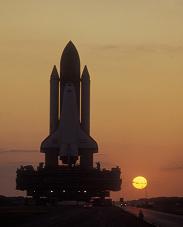 Guard against arguing too vehemently and emotively. Rather structure a logical argument and motivate your statements - let the speech structure do the work for you.

Now you can concentrate on delivering an effective speech and not having to worry about your fears of public speaking.

Right, persuade away...they're listening! As always - make the speech your own!

Lights...camera...action! You're sitting in a darkened cinema. The title, A Space Odyssey, blazes across the screen. Science fiction? Just another futuristic story dreamed up by creative minds? We need to re-evaluate and take a closer look. What was once science fiction is fast becoming reality!

The futuristic movie "2001: A Space Odyssey" introduced the audience to the limitless possibilities of space travel and sparked everyone's imagination. Here was a movie that seemed to give a "realistic" preview of what our future in space may look like - seemingly possible, but actually only fiction and fantasy .

When the movie premiered forty years ago, living and working in space was definitely "science fiction". Today, the reality is that three resident crew members are aboard the International Space Station 365 days of the year - operating one of the most complicated engineering projects in our technological history. This reality sees us continually pushing the boundaries of 21st century scientific, technological and engineering prototypes.

Although we haven't yet colonized the moon, NASA has a plan in place to return to the moon by 2020 and maintain a permanent presence there. Other space ventures include hotels in orbit and routine tourist space travel for extremely wealthy companies and entrepreneurs.

Mark Shuttleworth, a wealthy South African entrepreneur has already made space-tourism a reality. Mark rode a Russian Soyuz spacecraft to and from the International Space Station during a ten day mission in 2005. It is alleged that he paid $20 million to become the world's second space tourist.

Battling robot warriors...reality or "sci-fi'? We may not be close to utilizing Terminator 3 war-androids...yet...but Robert Laird's robot warrior program currently serves all four branches of the U.S Military. Robert says, "In my mind, someday we'll be doing battle with robots - not killing our own people and soldiers in battle."

Laird also says that  he recognizes that the military robots currently available are "probably 10 - 20 years behind the least sophisticated system you'd see in Terminator 3", but he adds, "we are getting there!"

Technological breakthroughs are happening on a daily basis and each new discovery brings sci-fi reality ever closer. The Predator is an unmanned aircraft with surveillance and missile capability that has flown hundreds of missions in Bosnia, Afghanistan and Iraq. Similarly, the UGV ( unmanned ground vehicle) Mini-flair is a large vehicle used for counter-mine duty in Bosnia.

What was once considered to be futuristic visions and dreams are now becoming today's science and reality! So, the next time you sit in a darkened movie theater and unimaginable creatures move across the screen - take note! The sci-fi creature on the screen today... could just be your friendly neighbor tomorrow.

An entertained audience is an audience that is actively listening - mission accomplished!

Return from Persuasive Speech Ideas to Words of Wisdom