Funny anniversary poems - "I love you" on a lighter note - fun, uplifting and teasing! 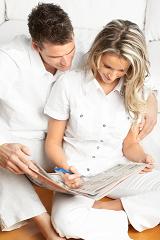 Funny poem...anniversary message simplified! Your love and appreciation is conveyed in a lighthearted and dignified manner.

Free anniversary speeches and a poem for parents anniversary are also an option if you are looking for a more formal tribute for a magical anniversary.

Either way - hope it's a great anniversary day.


Another wonderful year we've spent together,

In the years ahead - may our love last forever;

There's been the ugly, the good and the "bad",

But despite all of this - our love's no passing fad.

We've seen each other bleary-eyed with messed up hair,

Then there's been shopping sprees with money unaccounted,

And sport watching fanaticism - with no one feeling affronted.

We've had the, "Does this make my bum look fat?" question,

And fifth amendment answers - some things not worth the mention;

Toothpaste caps left off and the toilet seat positioning...

squabbles over laundry and trash and dry cleaning for fetching.

But, my dear...for better or worse we made our promise,

So Happy Anniversary my lover and my friend,

My appreciation, my love...my heart to you I send!