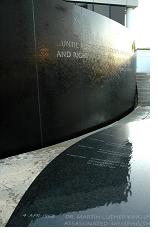 So, if you're looking for an excellent role model - a man who exemplified leadership - then look no further.

Prepare your speech well - edit and change as needed. You'll want your famous American speeches to reflect with your personality.

Then, present it with conviction! It will emphasize the strength of character so clearly evident in this remarkable man.

Humble Beginnings: Martin Luther King was a preacher and he related easily to the needs and the frustrations of the black people that he ministered to.  His empathy for the spirit of the black people at grass-roots drove his passion and pursuit of tolerance, equality and acceptance.

Martin Luther King's flowing and lyrical style of preaching echoed in his addresses to the public on issues of racism. People could identify with him and this credibility created a stronghold within the black church - an autonomous and notable institution. This foundation, from his humble beginnings, fueled his determination to succeed and gave him the platform and springboard that he so desperately needed.

Opinions are Not always Facts:  Many believed that the role of one man  against the hypocrisy of racial segregation would be inconsequential.

How could Martin Luther King possibly make a difference? More importantly, how could he make a difference while actively propagating and endorsing non violence and pacifism? The odds appeared to be stacked against him - but subjective opinions are not always objective facts. You cannot ignore or quantify the faith of the human spirit - especially one in pursuit of justice and equality for all!.

Adversity Overcome:  Martin Luther King exemplified extraordinary courage - spiritual, mental and physical. Throughout his quest he received hundreds of death threats, he was intimidated by  the powers of authority, his house was bombed while his wife and children were still inside and defamation of his character was a daily occurrence.

So, where did his courage come from in the face of this adversity? King relates a moment in his life when it all became clear to him. He recalls having received a threatening call in the early hours of the morning. The message was simple: stop what you are doing or your life will be over. As always, King turned to his source of refuge. He prayed.

He relates how he heard an inner voice telling him to stand firm behind righteousness and to fight for freedom and truth. He also relates how that same inner voice assured King that he would not be alone.

Time is Precious:  King was assassinated on the balcony of a motel in Memphis - time was indeed short. But he lived a lifetime in those years. He was a visionary - a pioneering leader who led a mass struggle- a non violent mass struggle - against racial inequality and it shaped and influenced a nation.

Before Martin Luther King, Rosa Parks, a Negro seamstress was imprisoned for not giving up her seat to a white man on a bus. Black men could not vote or serve on juries, they couldn't use the same rest rooms or eat in the same diners.

Success - a Legacy Lives On: King's dream and vision: "I have a dream that my four little children will one day live in a nation where they will not be judged by the color of their skin but by the content of their character" has become more of a reality. His legacy lives on.

Martin Luther King left the world a better place than when he came into it - remarkably, tragically and triumphantly so!

A famous American speech...Luther had his dream and what a dream it was! Here's wishing you, and your future dreams, every success and every happiness.